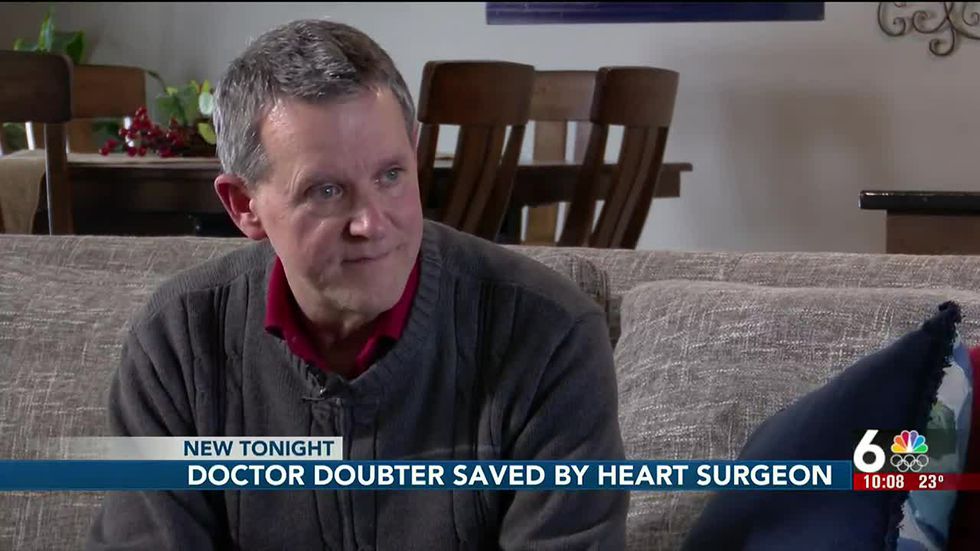 OMAHA, Neb. (WOWT) – A Nebraska man learned the hard way that heart disease is the leading cause of death for Americans.

Now, he wants to inspire others to take heart health seriously.

Tom Steiner was recently remodeling his basement and says normally, 30 trips up and down steps, moving heavy equipment wouldn’t be an issue.

Until, he started started having shortness of breath.

“I always had chest pains throughout my whole life because of caffeine and lack of sleep and pushing yourself and not doing the things you’re supposed to be doing” he admitted.

In fact, he shrugged off the signs his body kept showing him, for weeks, reluctantly agreeing to see his doctor for a stress test.

“I thought ehhh ok. whatever.” he joked. But when abnormalities showed up, Steiner was recommended to Dr. Shahbaz Malik, an Interventional Cardiologist at Nebraska Medicine.

By the time Steiner went to see him, Dr. Malik said it was right on time because if he’d waited longer, things could’ve been much worse.

”It’s incredibly important to identify symptoms of heart disease quick, early and to speak to your doctor sooner rather than later.” said Dr. Malik.

He explains that Steiner ultimately had an artery blockage on the surface of his heart and would need a stent to keep his coronary arteries open and reduce the chance of heart attack.

“Sixteen million people are diagnosed with heart disease every year. Of them, about one million will have a heart attack.” said Dr. Malik

In fact, during Dr. Malik’s interview with Six News as he was explaining the procedure – a heart catheterization – he was paged about a patient who actually did suffer a heart attack.

Steiner admits his personal experience with heart issues was scary, but said he’s grateful for the experience; especially because he went into the situation with a chip on his shoulder.

“I was expecting a condescending arrogant, self pompous, God complex doctor who was gonna dismiss me, look at his watch and say…’gotta move on.” said Steiner.

But it was the opposite according to Steiner, who described the Nebraska Medicine physicians as patient, and understanding as they guided him through the entire process.

Dr. Malik says it’s common for patients to have hesitations about seeing a cardiologist, especially because they often downplay signs from their body, but he cautions against how dangerous that is.

He says everyone should be acknowledging shortness of breath or chest pain and at least communicating with a doctor about it. Additionally, conversations with family about hereditary issues are encouraged.

Medical Visits You Shouldn’t Skip, Even If COVID-19 Cases Are Surging : Shots

Medicine with no side effects