Does DNA ‘determine’ our health? The way you live your life can significantly modulate the effects of our genetic endowment 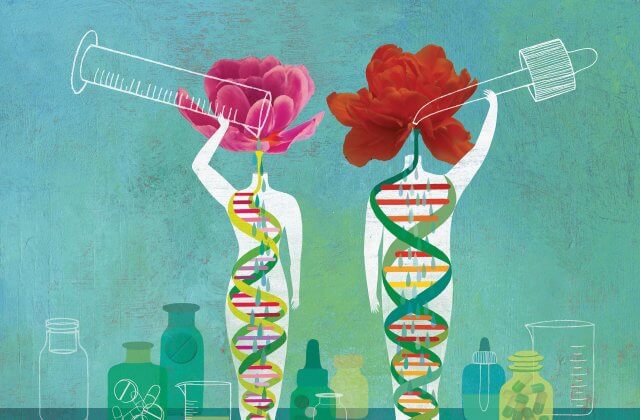 The study of genetics has always been an attempt to understand our biologically determined fate. Many of us know of families with a predisposition to maladies like heart disease or breast cancer. There are many kinds of interventions that can modulate the effects of our genetic endowment, whether directly (as in highly sophisticated gene therapy for genetic diseases) or pharmaceutical treatments, such as human growth hormone for growth hormone deficiency.

But even when such targeted interventions aren’t possible, we can modulate the effects of metabolic abnormalities that predispose to disease. Examples include antihypertensive medicines to lower blood pressure and drugs to reduce levels of blood cholesterol and triglycerides.

Behavioral interventions also have a place. Adopting a routine of walking, running or working out promotes healthy body function and weight control. It elevates mood, increases flexibility, and can lead to easier childbirth for women.

Less well known is the fact that exercise and good nutrition can also help lower the “epigenetic age” of an individual by “acting as a modulator of risk toward several diseases and enhancing longevity,” as described in a recent review.

Scientists have only recently realized that the human microbiome — the totality of microorganisms and their collective genetic material present in or on the human body — is highly individual. Researchers found through sequencing certain genes involved in protein synthesis that individuals “emit a detectable microbial cloud into surrounding indoor air,” and that “such clouds are sufficiently differentiated to allow the identification of individual occupants.”

There is additional evidence that the genetic risk of disease can be modified by promoting or maintaining a healthy cellular environment in the body. Changes or disruptions in the balance of the body’s microbiota (known as dysbiosis) may contribute to the development of diseases that might otherwise not have occurred.

For example, there’s evidence that dysbiosis in the microbiomes of the intestines, throat, mouth, and eyes causes epigenetic reprogramming and inflammation, resulting in a greater likelihood of eye diseases such as autoimmune uveitis, age-related macular degeneration, and open-angle glaucoma.

A similar phenomenon can occur in the oral biome. Everyone knows that regular brushing and flossing is important for helping to prevent cavities and oral disease, but few realize that saliva itself provides natural immune support and protection of a healthy oral biome. The pH of saliva, however, varies from individual to individual. More acidic saliva can increase the occurrence of cavities while a more basic pH prevents them.

As easy as chewing gum

The obvious question, then, is how can we keep a person’s salivary pH favorable, regardless of what his or her genetic predisposition may be? Perhaps surprisingly, it can be as simple as chewing sugar-free gum on a regular basis. It has been found experimentally that, “During prolonged chewing gum use, both salivary flow rates and pH remained significantly above the values for unstimulated saliva.”

An article in the Journal of the American Dental Association summarized the results of seven international clinical trials that have tested gum’s beneficial salivary effect on cavities. In the first test, children aged 8 through 12 in a Danish school were given sugar-free gum to chew after breakfast and lunch over the course of two years. Their teeth were X-rayed and compared with a control group from a second school where no gum chewing took place. The result was a statistically significant drop in cavities among the gum chewers.

Follow-up studies appear to show that there are more to the effects of gum than simply the short-term stimulation of saliva, as the benefits were found to last up to two or three years after the gum-chewing was discontinued. In fact, the researchers who conducted one of the original studies held a five-year reunion for participants and found that the difference between the gum-chewing and control groups had continued to increase in favor of the former group. They concluded:

These effects were explained by assuming that the [gum chewing] had facilitated the establishment of a low-virulent bacterial flora on the surfaces of the teeth, and especially on those teeth that erupted during the trial proper.

Clearly, we needn’t invariably be slaves to our genetic destiny. We can—and should—try to intervene in a variety of scientifically proven ways to improve our health and wellness.

Henry Miller, a physician and molecular biologist, is a senior fellow at the Pacific Research Institute. He was a Research Associate at the NIH and the founding director of the U.S. FDA’s Office of Biotechnology. Find Henry on Twitter @henryimiller

A version of this article was originally posted at the American Council on Science and Health and has been reposted here with permission. European Scientist can be found on Twitter @ACSHorg

Black community has new option for health care: The church