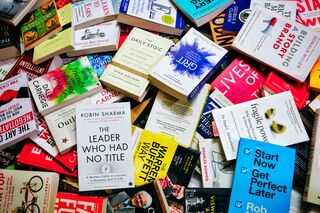 It is easy to dismiss self-help books and those who read them. But not only do we need serious self-help, we must also take self-help more seriously. Valued at $11 billion worldwide, self-help is a major global industry. It both reflects and generates many of our prevailing ideas about the self and about the cultures in which we live. The self-help industry not only seeks to shape the way in which we think, feel and behave, but also provides many of the core metaphors on which we rely to talk about our inner lives. Many of those metaphors, not least that of the mind as a computer that might require reprogramming, are at best unhelpful.

Critics of self-help believe that its current popularity is part of an all-pervasive neoliberal imperative to maximize efficiency. They see it as a sinister plot to direct all responsibility for our wellbeing back upon ourselves. Self-help, they feel, casts all our problems as personal, and our failures as owing to a lack of willpower and resilience, when they are in fact caused by the politics of capitalism. While this may be true of some self-help, the idea of self-improvement has a long and rich history, extending back to ancient wisdom traditions. The wish to improve ourselves is bound up with our need for self-knowledge, for mastery and for transformation. It is a timeless desire and an essential part of what makes us human.

And some self-improvement literature really can help us to become better people. I mean better not in a competitive but in an ethical sense: the improved self is more able to direct attention outwards, towards projects, other people, and the communities of which we are a part.

1. Marcus Aurelius, Meditations. The Roman emperor and Stoic philosopher Marcus Aurelius (121–180 CE) believed that all suffering is in our minds. Suffering is caused not by external events but by our reactions to those events — by faulty judgments and unrealistic expectations. Given that most external events are beyond our control, Aurelius argues in his Meditations that it is pointless to worry about them. Our evaluations of these events, by contrast, are completely within our control. It follows that all our mental energies should be directed inwards, with a view to controlling our minds. The key to a happy life, then, lies in adjusting our expectations, because “Only a madman looks for figs in winter.”

2. David D. Burns, Feeling Good: The New Mood Therapy (1980). The science underpinning David Burns’s Feeling Good: The New Mood Therapy may no longer be cutting-edge, but its core message remains a powerfully relevant one. A more down-to-earth version of Stoicism, it is based on the premises of Cognitive Behavioral Therapy (CBT). Feeling Good illustrates how our feelings are shaped by our thoughts, and contains some great techniques for training our minds to question negative thinking about ourselves and others.

3. Russ Harris, The Happiness Trap (2007). We are, of course, not purely rational creatures. Sometimes our attempts to control our thoughts can become counterproductive. In The Happiness Trap, the Australian psychologist Russ Harris explains the principles of Acceptance and Commitment Therapy (ACT). He invites us not to try to control our negative thoughts or uncomfortable feelings, but simply to de-fuse with them, to accept them, and then to let them go. That way we have more energy to commit to value-based action.

4. Lao-Tzu, Tao te Ching (ca. 4th century BCE). Spiritual self-cultivation through the art of letting go is the central theme of Lao-Tzu’s Tao te ching (The Classic of the Way and Virtue). In Daoism, letting go centers on the idea of offering no resistance to the natural order of things. It promotes a sophisticated form of submitting our will to cosmic forces, by accepting what is and loosening our attachments to our desires and expectations of specific outcomes. The Tao suggests that we can improve ourselves by returning to a simpler, more authentic and intuitive way of life. A key concept is wu wei – “non-action” or “effortless action.” Wu wei can perhaps best be described as a spiritual state marked by acceptance of what is and the absence of selfish desire. It is also a subtle but highly effective mode of soft power.

5. Eckhart Tolle, The Power of Now: A Guide Book to Spiritual Enlightenment (1998). We are not our thoughts, argues Eckhart Tolle in his bestselling The Power of Now. Most of our thoughts, Tolle writes, revolve around the past or the future. Our past furnishes us with an identity, while the future holds “the promise of salvation.” Both are illusions because the present moment is all we ever really have. We therefore need to learn to be present as “watchers” of our minds, witnessing our thought patterns rather than identifying with them. That way, we can relearn to live truly in the now.

6. Matthieu Ricard, Altruism: The Science and Psychology of Kindness (2013). In many theologies and wisdom traditions, altruism is the highest moral and spiritual value. More recently, psychologists have shown that altruistic acts not only benefit the recipient but also lead those who perform them to be happier. Moreover, practicing altruism, the French Buddhist monk Matthieu Ricard argues, is the key not just to our personal happiness but also to solving our most pressing social, economic and environmental problems. Altruism enables us “to connect harmoniously the challenges of the economy in the short term, quality of life in the mean term, and our future environment in the long term.”

7. Henry David Thoreau, Walden (1854). The American transcendentalist philosopher Henry David Thoreau famously withdrew to a cabin in the woods near Walden Pond, in Concord, Massachusetts, where he sought to live simply and “deliberately.” It was there that he developed the intriguing notion of “life cost” — the perfect antidote to unthinking materialism and the toxic Protestant work ethic to which so many of us are still enslaved. Most of us find it normal to trade our life time against goods, believing that productivity and success are secular signs of grace. Thoreau saw paid work as a necessary evil to which we should dedicate as little time as possible. His aim was not to work a single minute more than was necessary to cover his most basic living expenses, and to spend all his remaining time doing what he truly cherished.

8. Victor Frankl, Man’s Search for Meaning: The Classic Tribute to Hope from the Holocaust (1946). According to the Austrian psychiatrist and Holocaust survivor Victor Frankl, our most important task in life is to furnish it with meaning. Indeed, we must find meaning even in our suffering. In his deeply moving book, Frankl observes that those who managed to do this when they were interned in Nazi concentration camps had a much higher chance of survival. If there is a powerful “why” that drives us, he writes, we can tolerate almost any “how.” While meaning making can take many forms, including loving, creating and contributing to the well-being of others, Frankl insists on one limitation: meaning has to be situated in the world rather than in our own psyches. Our life’s purpose cannot just be the desire to become our best possible self, for the self is a very poor site for meaning.

9. Dante Alighieri, The Divine Comedy (1308–21). This fourteenth-century poem chronicles the gradual overcoming of the middle-aged and burned-out Dante’s spiritual weariness. Guided by his mentor Virgil, he journeys from Hell to Paradise, where he is eventually reunited with his beloved Beatrice. The epic can be read as a cautionary Christian tale or as an extended revenge fantasy in which many of Dante’s personal enemies get their gruesome comeuppance. But we can also read it as an archetypal story of spiritual growth and self-overcoming. The doubting Dante is systematically re-educated by his many encounters in Hell, Purgatory and Heaven. The inhabitants of Hell show him how not to live his life, and the costs of their bad choices. In the end, purged of his own weaknesses, Dante reaches a higher spiritual plane and glimpses the divine.

10. Anonymous, The Epic of Gilgamesh. Almost all forms of self-improvement resemble a quest narrative or a heroic journey. Such narratives entail the hero(ine) venturing into the unknown — a dark wood, an underground kingdom or the belly of a beast. There they encounter obstacles and often have to engage in battle with an enemy or a temptation. Having overcome these challenges, they return from their adventures transformed and ready to share with others what they have learned, the true function of the hero(ine) being to help others. The oldest surviving narrative of this kind recounts how the formerly selfish Mesopotamian king Gilgamesh returns from the wilderness into which he ventured, bearing the plant of eternal life. Rather than eating it himself, he shares his boon with his people.

11. Dale Carnegie, How to Win Friends and Influence People (1936). Written during the Great Depression, How to Win Friends and Influence People is still in print for a reason, teeming with sensible and practical tips for making the best of human relations. Key to Carnegie’s method is the art of mentalizing — stepping into the shoes of others and trying to see the world from their point of view. Very few of us master this art, because it requires the ability to imagine what lies beyond our own cognitive maps. As Carnegie argues, however, this beyond is not exactly complex: Human beings are above all defined by their unquenchable thirst for attention, sympathy and respect. For others to like us, we simply have to find ways of giving them what they most need.

12. Angela Duckworth, Grit: Why Passion and Resilience are the Secrets to Success (2017). According to psychologist Angela Duckworth, grit tops talent every time. That is music to the ears of anyone inclined to identify with Aesop’s plodding tortoise rather than the effortlessly speedy hare. “Our potential is one thing. What we do with it is quite another,” Duckworth writes. Grit is a drive to improve both our skills and our performance by consistent effort. Gritty people are always eager to learn and are driven by an enduring passion. They learn from their mistakes, have direction, and live more coherent lives.

A slightly shorter version of this post appears in The Guardian.

I discuss these and many other texts in greater depth in The Art of Self-Improvement: Ten Timeless Truths.

Have Leg Artery Illness? Stroll Till It Hurts | Well being & Health