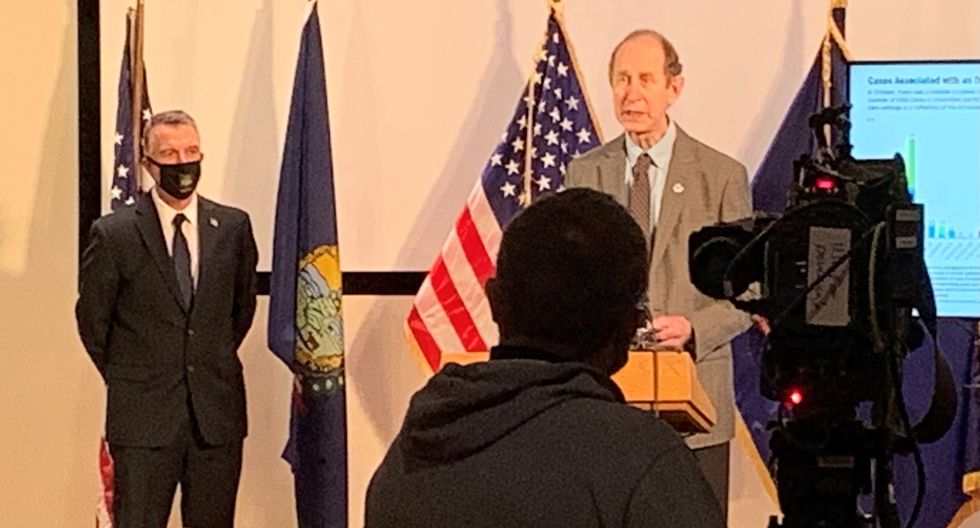 MONTPELIER, Vt. (WCAX) – Vermont health officials Friday said surging COVID case counts over the past week are the highest they have been since the start of the pandemic and pleaded with residents to stop the spread. But health officials say those most vulnerable to severe illness are being vaccinated in ever-increasing numbers, helping to limit deaths from the virus.

“My optimism is for the future. The future is very near. But when it comes to the present, I am very concerned,” said Vermont Health Commissioner Dr. Mark Levine.

Officials say the infections are driven partially by virus variants, which have now been found in five counties. Another major factor is behavior, including people gathering, not wearing masks, and not quarantining after travel. Younger people are far less likely to be hospitalized or die from the virus, but leaders are still concerned about the impact of rising case numbers. “Increased cases can still cause disruptions in the classroom, in the office, or on the job site,” said Gov. Phil Scott.

Despite the higher cases, the governor says that it is not changing or delaying his reopening plan, which is slated to come out next week.

Since over 85% of those over 65 are vaccinated and the risk of hospitalization isn’t as high, officials aren’t making any policy changes to combat the rise in cases. Now that Vermont has more tools in its COVID-19 arsenal, including testing, contact tracing, and containment, Levine says the state can be more strategic. “Isolated cases or even an occasional outbreak in a school does not mean that closing schools is the answer,” he said.

That means education officials will move ahead adopting new distancing standards of three feet in all K-12 schools to allow more space for in-person learning. “Seeking to strike the balance of the risk of COVID-19 versus the risk of their healthy development and academic success,” said Education Secretary Dan French.

Dr. Levine says we’re about three weeks away from having enough people be vaccinated that the virus will diminish in the community. But getting there, he says, depends on everyone doing their part.

Cases rose among every Vermont age group last month except for those 70 and older. Thanks to the vaccines that age group saw a 54% drop. But people in their 40s are seeing a 51% increase and those in their 30s a 35% increase. Adolescents and young adults are seeing the largest increases with a 101% jump among 10 to 19-year-olds and a 150% spike among 20 to 29-year-olds.

If you break these age groups down further, 18 to 24 year-olds have the highest case increase followed by the 10 to 17 year-olds.

So why not vaccinate those younger age groups sooner? Health officials say it’s all about the risk level for different age groups for getting COVID, being hospitalized, and dying. While younger people have a higher risk of getting the virus, they have far lower rates of hospitalization or death compared to those who are 40 or over.

But the younger ages are clearly having an impact on the state’s overall data. Vermont almost set a 14-day average case record of cases per 100,000 and the seven-day average did set a new record. And as Dr. Levine said Friday, they’re not interested in setting these kinds of records.

That’s also bad news for Vermont’s long-term forecast, which is now expected to peak later this month at about 275 cases a day. Officials say hitting the 50% vaccination mark will make a big difference in the overall case rate based on what they’ve noticed in other countries like Israel. Right now, about 40% of Vermont adults have at least one dose.

As of Friday, officials say nearly 40% of Vermonters have had at least one dose of the vaccine. Essex County has the lowest rate. Just 31% of residents have had at least one shot. Rutland County remains on top with a rate of 45%. AHS Secretary Mike Smith urged residents to get vaccinated. “Now, to all our communities in Essex County, we are making significant efforts to improve vaccination rates and we need participation from everyone in that County,” he said. The state will be setting up numerous mobile clinics on April 10th and 11th.

The state tested 1,472 school staffers as part of its surveillance program. The state found one case of COVID in school staff. Nearly 80% of school staff have now been vaccinated.

The state will adopt new distancing standards of three feet in all K-12 schools. Education Secretary Dan French says studies show there’s no difference in stopping the spread and that this will help get more kids back in the classroom.

Adult day centers can resume group activities now that so many older Vermonters have been vaccinated.

The state is trying to get staff vaccinated at the Vermont Veterans Home in Bennington where COVID has been detected. Just 40% of staff members there have opted to get the shot.